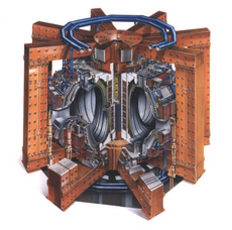 JET (Joint European Torus) was designed to carry out fusion experiments in conditions close to those of a commercial reactor. JET has been operating since 1983, and is the largest and most powerful magnetic confinement fusion device in the world. Knowledge gained from JET will provide valuable input into the design of “next generation” devices such as ITER. The involvement of LPP-ERM/KMS centers on the development and operation of several ICRH antennas installed on JET, and on the dedicated ICRH physics program. LPP-ERM/KMS is the lead Association in the JET Enhanced Performance project aiming at constructing and commissioning a JET ITER-like ICRH antenna. The ITER-like antenna has been constructed in an ELM- or load-resilient way, meaning that, although the plasma may vary strongly, this does not translate into large impedance variations, thus allowing the generators to couple RF power to the plasma despite ELMs. As the walls of a future fusion reactor will have to be covered to a high fraction by a blanket and only a small area will be available for systems like antennas, it is important that any heating system features a high power density. The ITER-like antenna at JET will be capable of delivering 8MW/m² to plasmas with ELMs at a relatively large distance between antenna and plasma, which, in turn, is another challenging condition for the ITER ICRH system. The antenna is now installed in JET and is the subject of an intensive commissioning and exploitation phase since March 2008.

LPP-ERM/KMS is also heavily involved in the ICRH physics program at JET. Experiments in the framework of the Taskforce H as well as experiments where RF heating was used as a tool to study the behavior of plasmas, were performed at JET. Below is listed a selection of these experiments: